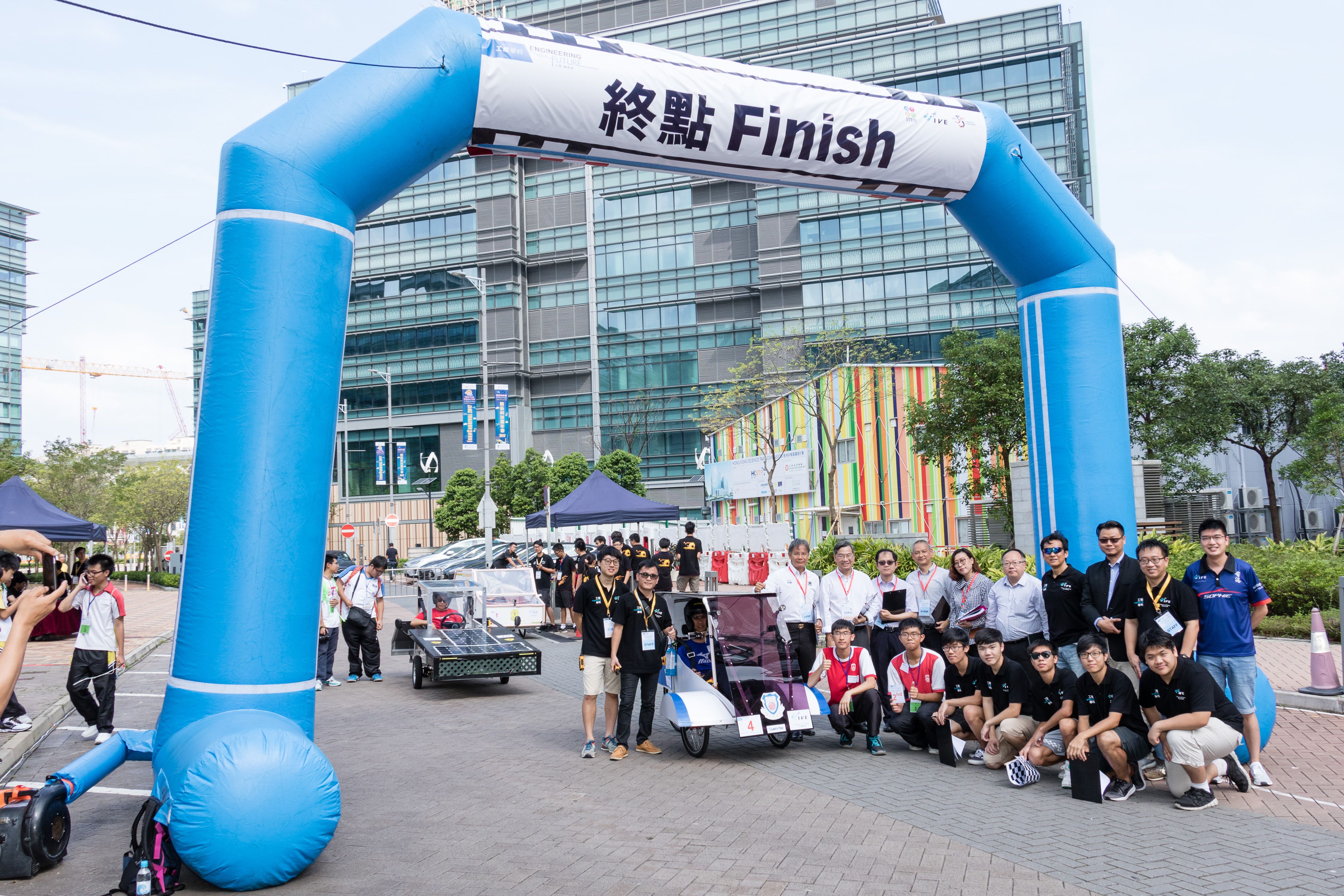 Exploring the use of renewable energy is a global trend. The Engineering Discipline of the Hong Kong Institute of Vocational Education (IVE), a member institution of the Vocational Training Council (VTC), hosted the New Energy New Generation Carnival and Secondary School Solar Car Competition today (7 October) at the Hong Kong Science and Technology Park (HKSTP) to provide the younger generation with immersive experiences in the application of solar power. The line-up of exciting activities was also aimed at inspiring the young participants’ interest in STEM subjects (Science, Technology, Engineering and Mathematics).

Concurrently live feed from the World Solar Challenge 2017 being held in Australia enabled visitors to experience the thrilling atmosphere of that competition in which SOPHIE VI, the sixth generation solar-powered car developed by the IVE Engineering Discipline, was taking part.

Meanwhile back on home ground, groups of rideable solar cars and remote speedy solar cars specially designed by local secondary school students came to a showdown at the HKSTP. Nine teams were shortlisted into the final round. Each team crafted a unique solar car with self-chosen materials like wood boards and carbon fibre. In the final round, the teams had to negotiate a 1.4 km racetrack with the maximum energy efficiency. In the end the team from The Church of Christ in China Tam Lee Lai Fun Memorial Secondary School clinched the overall championship.

Both the heats and final rounds of the Secondary School Remote Speedy Solar Car Competition were held today. To challenge for the awards, the teams were required to operate their car over a designated track featuring hurdles like muddy ground, a water pool and slope. The track in the heats simulated that of the Hong Kong E-Prix 2017, while the one adopted in the final competition referenced the ranking racetrack of the World Solar Challenge 2017 held in Australia. Team 3 from Workers' Children Secondary School emerged as the eventual champion.

Officiating at the awards presentation were Acting Director of Electrical and Mechanical Services Alfred SIT, Member of the Legislative Council (Engineering) LO Wai-kwok and VTC Chairman Dr Clement CHEN. Mr Sit said, “I am glad to see that the event organiser shares the objective of the same competition we organised last year. We cooperate closely with an aim to encourage innovativeness of new generation and enhance their knowledge in renewable energy and engineering applications. We hope that the young people will be motivated to undertake scientific research and develop highly effective solar cars.” Mr Sit further pointed out that IVE sent the SOPHIE VI team to Australia and completing with top-notch teams around the world showing that the innovation and technologies of the new generation of Hong Kong was on a par with global standards.

VTC Chairman Dr Clement CHEN said, “In response to developing needs of the new era, the Government actively promotes STEM education to train up diversified human capital and equip students with the requisite skills of the 21st Century like creativity, coordination and problem-solving skills. In support of the Government policy, VTC nurtures young talents of vocational and professional education and training (VPET). The Carnival today is aimed at inspiring the younger generation on the use of renewable energy and deepening their knowledge of pioneering technologies and the STEM subjects.”

Besides enjoying the intense competitions, visitors were able to explore a variety of STEM booths like “Robotic Car with Network Control Workshop and Robotic Car Racing Track”, where they could craft a small remote control car of their own and create a programme to direct the car to complete designated tasks with the aid of a mobile device. Another booth called “Boats Powered by Renewable Energy” was aimed at helping the visitors deepen their knowledge of renewable energy and observe how different energy forms like solar, wind and elastic potential energy powered the boats. The “VR/AR Demonstration” made use of the Virtual Reality (VR) and Augmented Reality (AR) teaching system used by the IVE Engineering Discipline, turning visitors into building services engineers or aircraft maintenance personnel, so that they could experience their daily work under a simulated environment. The event was supported by the Education Bureau, the Electrical and Mechanical Services Department, the Hong Kong Automobile Association, the Hong Kong Institution of Engineers, the Institute of the Motor Industry Hong Kong, the Institution of Engineering and Technology Hong Kong and the Institution of Mechanical Engineers.

07 October, 2017 10:00AM – 04:00PM
Hong Kong Science and Technology Park (HKSTP)
Competition
Back
SUBSCRIBE TO OUR NEWSLETTER
Signup for our newsletter to get the latest news, updates and amazing offers delivered directly in your inbox.
Subscribe